Tero Heikkinen
Finland
Published in in English on Feb 9, 2012

NO, THE HEADLINE IS WRONG. THIS IS THE NEW BEGINNING…

It is 2012 and this is the last year of our existence on this planet. Yeah, right. It is only the baktun cycle on the Mayan calendar that’s believed to end… Earlier today Mew (Bo Madsen) posted a few messages (on Facebook and Twitter) worth repeating here. First, something we already knew about:

“Good morning Frengerinos. You have awaken. Lets hold each others hands for a moment.

Mew have commenced writing the new piece that will become your friend. Instruments have started bonding, amorously. Theres a fire burning.

Then (something we have also been waiting for):

“Shows on the rise.”

And finally a note from documentary filmmaker Nicole Horanyi:

I am a documentary filmmaker about to start a film on the subject of the great mysterious orchestre Lords of Destruction. It is a film that relates to LOD and also partly Mew, the beginning, and the process of creating.

I am looking interview fans of LOD for the film, I would be grateful for any response, my email is: nicolehoranyi (at) gmail.com

Thank you and have very good day all of you,
Nicole Horanyi”

We have been expecting shows for this Summer since they have not toured since late 2010 when the opera house shows took place in Copenhagen and Aarhus. Each band member have been busy on their own projects – most notably Jonas Bjerre who has been public enough for us to post at least something on this Mew-less year of 2011. Now, on our sixth year, we (MewX.info) are on a mission to make this fansite bigger and better. Just you wait.

There’s no knowing how long the writing and recording process for the next album will take, but we do know that Mew are not the fastest artists – and that is a good thing. Nothing wrong with aiming for perfection. In between this process, fans sure don’t mind seeing them live a few times. And when they do, there will probably be some new music included – even when they are in very early stages. They have done this before with Shelter (future Circuitry of the Wolf), intro for Do You Love It? and whatnot. Bamse (the bear) may appear on the next album in some form. We will surely get pictures and videos from the writing process throughout the year. That is how Mew roll. Pictures tell a thousand words.

The documentary about Lords of Destruction is a fun idea, but how is Nicole able to find fans for interviews if we have heard ONE song from the band? Did anyone see someone shooting the opera show finales? Anyway, the final product will be investigative journalism for Mew fans to appreciate.

I have not followed Apparatjik in a while, knowing that they have released new music. If anyone is interested in writing about it, let me know at admin (at) mewx.info. That would be appreciated.

To conclude, an older picture with Mew and JJ from 2003 that Nick Watts shared with us. May post more later… 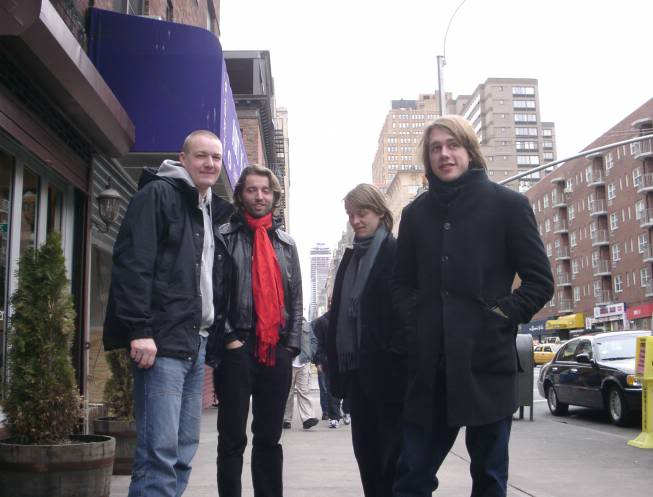