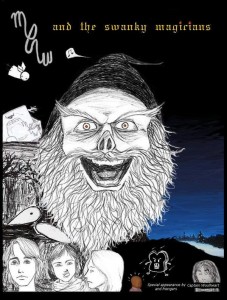 Mew and the Swanky Magicians

A Mew comic written and illustrated by Frengers!

This frenger-made comic has been running for some years. It started in 2006 when the forum on Mew’s official site was very active and frengers posted art and other creative ramblings on there. Some frengers thought that it could be a nice idea to join their creative forces and see if they could start a collaboration in the form of a comic. Soon there was the first page, starting with the comical bird (a creature created by Jonas Bjerre – not by the frengers) wandering around in a dark place. It seems to start off somewhere in the Frengers Game, which is also where the name of the comic comes from. (You must have encountered it while playing it.) After the first page, another frenger made another page and the story continued like that. With so many different frengers creating the content, it soon became a crazy story with elements like a poisonous-sandwich-eating-Bo and a frenger losing his ***** by getting tricked by the evil sandwich wizard. Anyway, read it and you see what I mean.

At first, the pages only showed up on the Mew forum, but the comic grew and grew. To let other frengers that never visited the forum also have the opportunity to join, we started showing the comic on social media as well; first on MySpace, then also Facebook. By then we had also developed guidelines to prevent frengers from making pages at the same time. The idea was that one frenger at a time made a page in a considerable timespan. We tried to update the comic’s status as frequent as possible so that frengers would know if a page was in the works or if they could start making one. There was a team of frengers behind the drapes, taking care of the list of frengers that wanted to make a page, uploading the pages of everyone and giving thumbs up when someone could start with a page. Any frenger could join, whether you were good at drawing or not (um, maybe not all frengers, ’cause I remember I ate some of them because they took months to finish their ******* page.) I don’t know if that had something to do with the ending of the comic. At a certain moment there were no volunteers anymore for pages. This could be the end of the comic…or maybe just a break. Maybe when the official Mew site becomes active again and the social part of this MewX website becomes active, we can revive the comic. For the meantime, enjoy (re)reading the whole comic as it is so far.