Take a peek at Mew’s very first webpage from the year 1997. Content has been harvested from the Wayback Machine, which takes snapshots of old websites and stores them for safe keeping.

Note: It probably goes without saying, but most of this information is completely out of date, so things like links and email addresses are almost certainly dead. 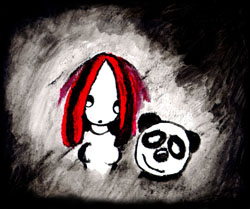 Welcome to the homepage of

Each panda represents a different topic. Please click on them...

You are guest number

This site is best viewed using Netscape 3.0 or higher and with 800 by 600 pixel resolution, true colours.

Mew was formed in 1994 in Copenhagen, Denmark by guitarists Bo Madsen and Jonas Bjerre, and bassist Johan Wohlert when their previous band collapsed. Trying out an infinite number of drummers, they finally teamed up with Silas Graae (the brother of one of Bo´s class mates). During the next couples of months they developed a certain style, which is kinda spunky and twinkly and loud. Late November 1995, approximately a year after Silas joined, they played their first live gig as Mew. Since then, they have been playing the Danish clubs, supporting bands like Come, Telstar Ponies and Velvet Belly.

Mew released their debut album April 2nd 1997. It is produced by Damon Tutunjian of the boston-based band Swirlies. If you need any information on Mew, please contact their label:

Or you can email Mew at mew@danbbs.dk

We are playing RUST in Copenhagen on the 21st of August. Then, on the 3rd of October we head for Odense to play at Studenterhuset.

The next single is coming out in the late fall. It will contain a new version of She came home for Christmas, some remixes and probably a new song as well. Remixes done by Opiate and Rune!

We are currently looking for a girl to sing and play synths. If you know anyone, please email us!

We released our debut album "a triumph for man" on April 2nd 1997. Read the reviews.

We have made a video for our single "I should have been a tsin-tsi (for you)". It is directed by Nicolas Winding Refn (who directed "PUSHER"). Click here to see some snapshots and learn more about the video. 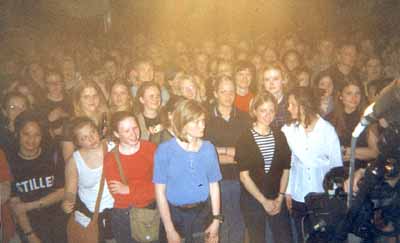 Thanks to everyone who went to see our show on our tour of Denmark with luksus and the P4 dj´s (Rune, Opiate, Vigga and Stoffer). We´re all going to miss P4. A special thank you to Mads Vegas who is the most cosmic kid on the planet!!! 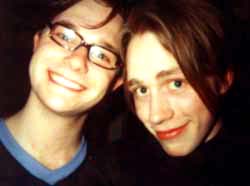 We played live at the monoland/P4 arrangement at Vega, Copenhagen, on the 19th of December, along with Nikolaj Nørlund, Speaker Bite Me, Luksus, Port Friendly and Lovebites! Read the reviews here.

You can download some clips of our songs,
they are both in Sun-format (.au) and compressed (.zip)
All of this material is taken from early demos (and it´s not excactly hifi...)
Email us and tell us what you think.

I should have been a Tsin-Tsi (for you)

there´s a shooting star / can you tell me how / I´m supposed to screw this up?
add my tremolo / likes to shine on yours and mine / all my emptiness is confined in metric rhyme
make all your lies come true / I´ve been a liar too / follow the things you need
make your whole life complete / there´s a puking girl / trying to define herself
if spontaniously congealed into nothing / idiot / you could have become you
there´s a friend / trapped in this dream too / it´s like I said before
like in the notes you tore / should I say goodnight to you? / really I
tell me honestly / am I adorable? / in her beautiful balloon / she´s got hands
but she cannot reach the moon / wish I was gay / then I wouldn´t have to play
all her games / get her started / how could I not forget?

This is the Mew gallery of photos and pictures.
Some of these are kinda old but that just makes us look younger than we are...
(not that our surfaces should have anything to do with our music, really).

An EMBARRASING photo of Bo... 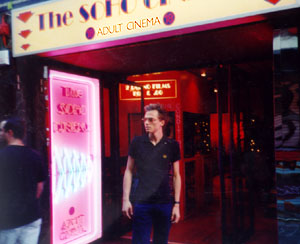 In case you´re not sure, Bo is the guy with the shaades! 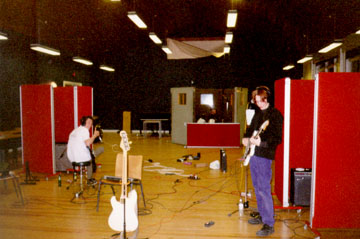 
Damon Tutunjian of the Swirlies 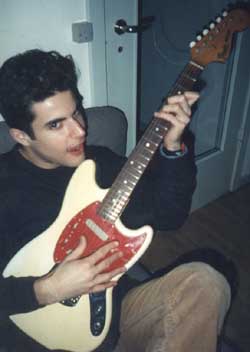 
Johan offers someone a drink in Krakow, Poland 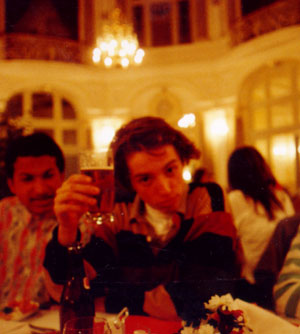 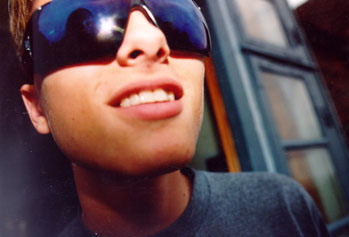 
Mew at the antique transit. 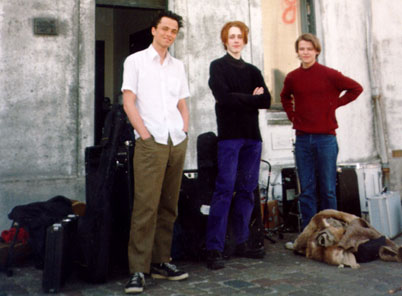 From left to right: Bo, Jonas and Silas. 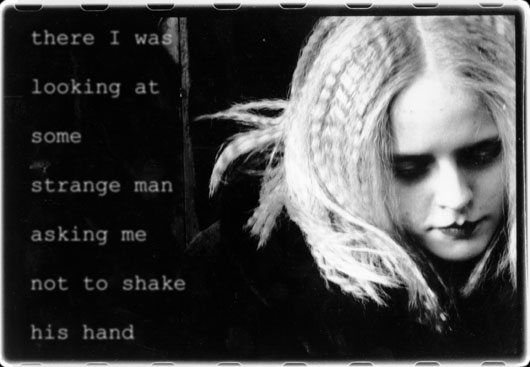 Photograph by Hannah, poetry by Jonas, the girl is called Silja. 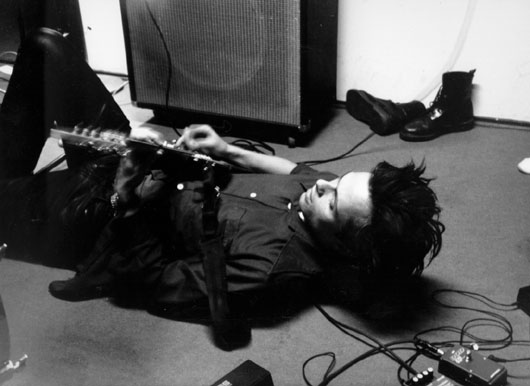 Bo is making noise (on the floor). Trine took this picture.

Polytone - our friends and favourite band in DK

Swirlies - in which Damon Tutunjian (our producer) is the singer/guitarist

Alleder´s Homepage - he has a story to tell

Destiny-601 - the place where Jonas works in the daytime