Mew last played Minneapolis in 2006, a short while after I had discovered them. Nine years later, nearly to the day, they came back to Minneapolis, and I would see them live for the first time.

Triple Rock is a small club with a capacity of nearly 400. The show was completely sold out, and the room was packed. I spotted many Frengers in Mew shirts, and there was an excitement in the air.

The Dodos were the opening band. Despite breaking a guitar string in the middle of the first song, they played a great set, including songs they never play live since they had to improvise with the broken guitar string. The guitarist told the audience at one point that we were so lucky to see Mew in such a small club.

After The Dodos’ set, there was a short break while the stage was set up for Mew. We were so close to the stage, that as soon as the setlists were taped down, everyone leaned in to try to see what songs we would be treated to tonight. Finally Mew took the stage and teared into Witness. The audience was pumped. Everyone was dancing and singing along.

During The Zookeeper’s Boy, Jonas Bjerre held the microphone out to the audience to sing the chorus. One eager fan sang his best “my lady are you”, and then managed to give Jonas a hug and kiss his hand to the audiences delight and applause. Jonas was very gracious about the interaction. Mew is so kind to their Frengers, which is one of the reasons we are so dedicated. 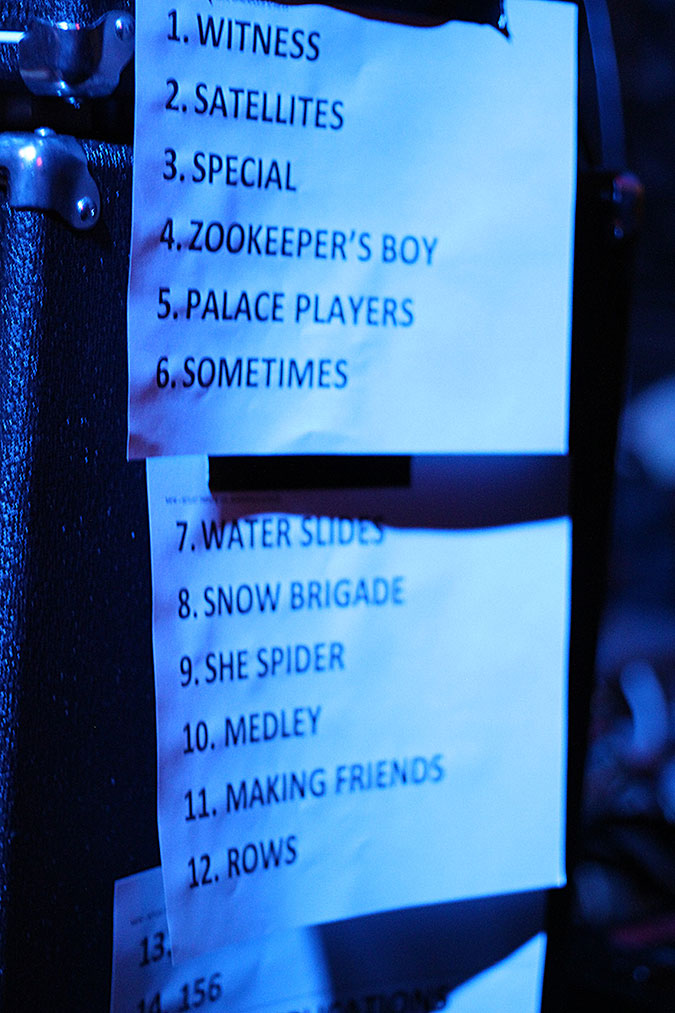 A highlight of the night for me was Rows, my favorite song from “+-“. At over 10 minutes, it wasn’t nearly long enough. By the time Jonas sang, “Draw for me a rainbow/to signify loving eyes” in the final movement of the song, I was in tears. I could have listened to it over and over again. The feeling was shared as one Frenger called out “We can stay here all night!”

Finally it was time for Comforting Sounds, the audience’s cue that the night would soon be over. After the song ended and the band took their bow, I saw Frengers stopping to talk with each other and give each other hugs. The audience really felt like a community. It was a special feeling that I had never experienced at other shows. As Johan Wohlert said during the show, “This town might belong to Prince, but I think tonight it belongs to you all.”

After the show, we slipped outside and found the tour bus parked in the front and the band happily talking with fans. I had made a present for the band and was hoping I would have the opportunity to give it to them, and here it was. I saw that Jonas wasn’t talking to anyone, so I approached him with my gift. He slowly opened the gift bag, and one by one pulled out mini felted dolls I had made of each band member. He pulled his own doll out first, and then guessed who each one was as he pulled it out of the bag. The Silas Graae doll was obvious with its tiny earring, and the Johan doll got a chuckle from Jonas. There was a little sadness as he pulled out the Bo Madsen doll. Mads Wegner did a wonderful job filling in for Bo, but it was obvious that he was missed. After a quick picture with Jonas and the dolls, I headed out into the night with wonderful memories and a huge smile.