Frengers
Published in in English on Aug 1, 2017 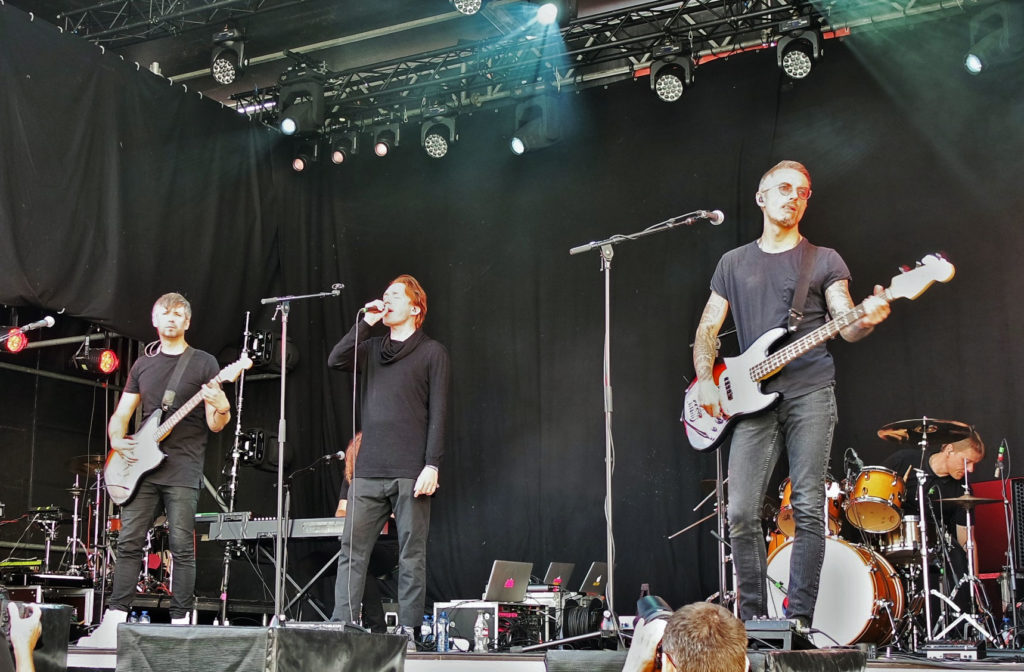 “Whatever is received into something is received according to the condition of the receiver.”

It’s impossible to put anything into its true context without some knowledge of what the possible extremes feel like. Politics, football, architecture, love affairs, whatever. My opinions on those fundamental things are really only formed around my ideas of what those limits are. They’re not empirical truths. Your polar opposites and boundaries are likely different from mine. My own relative disappointments could just as well be someone else’s wildest dreams. One person’s domestic bliss is very likely to be my interminable tedium.

On one hand, there’s 30,000 people jumping up and down in the Arena tent at Roskilde in 2009 – eight years ago. Sorry, EIGHT? Nearly a quarter of the time I’ve been alive has apparently happened between then and now. That elapsed eternity hasn’t made my mental pictures from that night less vivid, more hazy, less treasured. It was a swell of crazed emotion and wine-fuelled noise. They could have sat down on stage and given a reading of extended passages of Ulysses and the reaction would still have been hysteric. We all took a moment afterwards to get composed, we dusted ourselves down, and we went dancing at Promilleservice til 4am with boxes of 60 kroner wine. This was my high water mark. This was as primal as it ever got.

And then there’s July 2017 – a truly bizarre bit of booking, a 45 minute set in broad daylight, in the grounds of a provincial Belgian museum, at 6pm on a working day, with a couple of hundred people present, of which 20 are interested, and of those, none are within 5 metres of the stage. Who came up with this vision? Who thought it made sense in the grander scheme? Was it an experiment in how to most bemusedly misuse arts funding? Did anyone think about the folks in offices who physically couldn’t be there in time? Separating from reality does require some understanding of what the limits of that reality are. It’s why doors don’t open to venues at 2pm on a Wednesday. It’s why millionaires almost never sing songs that mean anything to me.

Logistics are fine to wonder about, but I’m more interested in the possibles. Does the creative intent still work when it’s more house band at a village fete than superstars with Visuals, fedt? This is another type of water mark to my Roskilde odyssey all those years ago – not a low one, just un-energised, with minimal osmosis. The capacity for any sort of transformative vision felt slim; this is as informal as a gig by these dark, experimental, cold idols is ever likely to be. Whatever else I have thought about Mew, halfway through my second decade of thinking about them, informality has never been the first thing to spring to mind. Being a rock star is about appearing mythical, aloof. Kevin Shields, Jack Barnett, Van Morrison, Jim Reid. It’s about intensity.

As it turns out, yes. Yes. The creative intent does still translate. Oui. Ja (What’s the Flemish for ‘Si’?). As Larkin wrote about – for – Sidney Bechet: “On me your voice falls as they say love should / Like an enormous YES”.

It is still possible to feel things about tunes and compositions conceived through the prism of darkness and projections should they be performed in daylight. It is still the same emotional resonance and long hair, the same awkward dancing, the same stoic refusal to not play Wry and 156, which is now starting to border on the absurd. I start the set sitting down in the sunshine, drinking my Hoegaarden for €2.20. I end standing up, digging my left set of fingers into my right set of ribs as I usually do when the noise is mine. My extremes, my noise, received according to my condition, so I tend to want to clasp it. It makes me feel human.

On this occasion, the conditions are right, against all those odds. Right in a different way, right in a way that’s not ideal, but right nonetheless. Right in a way that they weren’t right when I saw them in a stupendous Danish opera house in May of this year, and didn’t really enjoy the show much. I was sat in a seat, but I was not being transported anywhere in particular.

I say “right”, repeatedly – I just mean that I enjoyed it. That’s all I’m fit to write. I enjoyed Visuals without the visuals, and I more than enjoyed the town of Leuven itself. It felt far more of a fairytale place than Bruges did – you seen that Town Hall? My stars! I fell, felt, in love with the place, more than a bit. I loved the accompanying pale sunshine, the unnecessary brevity of the soundtrack, my favourite(ish) band without more than a smattering of a handful of others present who thought the same. And Twist Quest is so good, by the way. So good. At a time when there’s a general dire paucity of any new sounds or compositions involving guitars, it’s precious to take a moment to think about what a skewed, singular idea this is, and the vanishing smallness of the number of bands who would be able to execute it with such playful brio. The stuttering beats, deformed vocal rhythms and in particular the little spoken word segment all recall Apparatjik at their best. It’s ace.

The record Mew are currently touring may be disappointing overall, but there are nonetheless plenty of things to admire about it. The most admirable thing – maybe the only important thing at all – is that the creators refuse to not exist; they are still generating their own context, for those who are interested in receiving it. That context is by definition very different than that of when we were teenagers. And that’s fine. Ca va. Even without massed hundreds, even without a crushed craze to take in the sound, even without the projected images that are half the point of the whole exercise, they are still, at least in my own head,

“greeted as the natural noise of good,
Scattering long-haired grief and scored pity.”

Setlist: M-idzomer Festival (Leuven, Belgium)
In a Better Place / Special / The Zookeeper’s Boy / Satellites / Twist Quest / Nothingness and No Regrets / Am I Wry? No / 156 — Comforting Sounds