Ann Lancaster
United States
Published in in English on Jun 15, 2015

The morning of June 11, I awoke to a flurry of messages from friends all over the world. “Look! I found you!” they said. “Here I am too!” My entire social network was abuzz with the news of the release of Mew’s newest music video for “The Night Believer”. Just me and Mew and 999 of my closest Frengers. 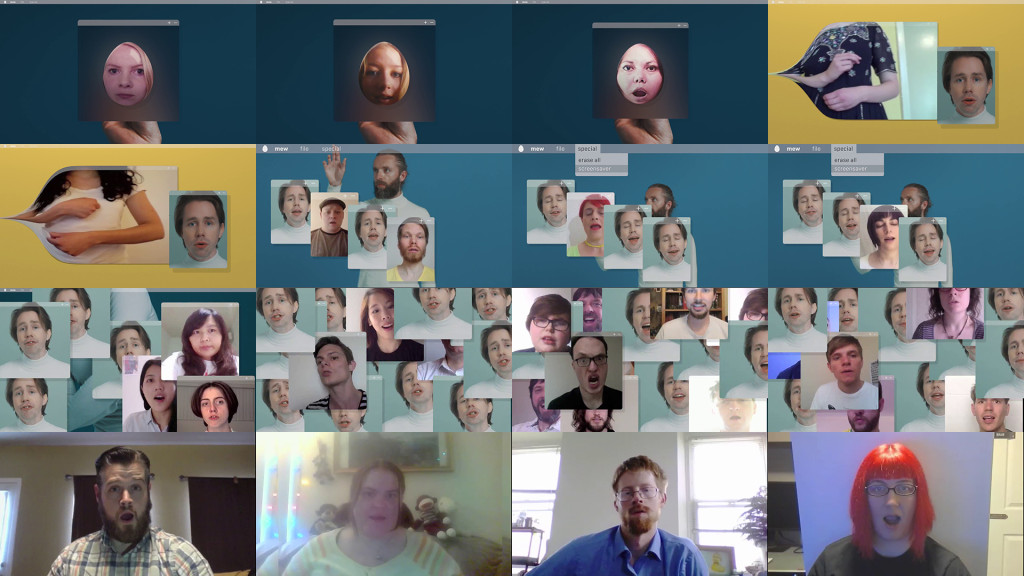 Just a small selection of people I recognize and regularly interact with online, captured frame by frame from the final video

For anyone not in the know (which is unlikely given you are reading this website, but for the sake of thoroughness I’ll explain anyhow) the word “Frengers” is a portmanteau of “friends” and “strangers”. In the liner notes for the album “Frengers” they have given us a definition: “Not Quite Friends But Not Quite Strangers”. The word was eagerly adopted as the friendly name for Mew’s fanbase.

Mew has always had a very strong relationship with their fans. They have long supported this website and welcomed interaction of many kinds. Jonas Bjerre once told me he was astounded by the fact that so many people had come together around their band, to form acquaintances, friendships, and even marriages. Nearly every Frenger I’ve met online or in person has felt like an instant friend. There’s just something inherently special about Mew fans: they tend to be kind, friendly, intelligent, creative, and accepting of each other’s differences. It feels like a tribe brought together by an underlying shared attraction to the bizarre and the beautiful.

“The Night Believer” celebrates this tribe with great fanfare. 2500 people from all over the world were chosen to submit a webcam photo of themselves plus a recording of them singing parts of the song alongside Jonas. 1000 of these made the final cut. A week prior to the video’s release, Microsoft Denmark provided a behind-the-scenes video which explained in business-terms how the idea was formed and executed from their end. But what was the experience like for a fan participating in the process?

After Mew announced the project, we were directed to a web form to submit our information. They told us we would be selected based on geographic spread, in order to best represent the diversity of the fanbase. As we waited for a response, the anticipation morphed into real anxiety; of the hundreds of Mew fans I know in the world, only a handful had been accepted into the project. How could that be?! As it turned out, there had been a snafu in the process of sending out the invitations, and within a day almost everyone I knew who had signed up had also been accepted. Yay!

The next step contained two separate parts: a openly accessible collaborative Microsoft OneNote Online document which everyone was encouraged to add content to, as well as the video creation studio website which required a username and password to access. A very small subset of participants were also chosen to attend a short Q&A session with Bo Madsen and Silas Graae over Skype. 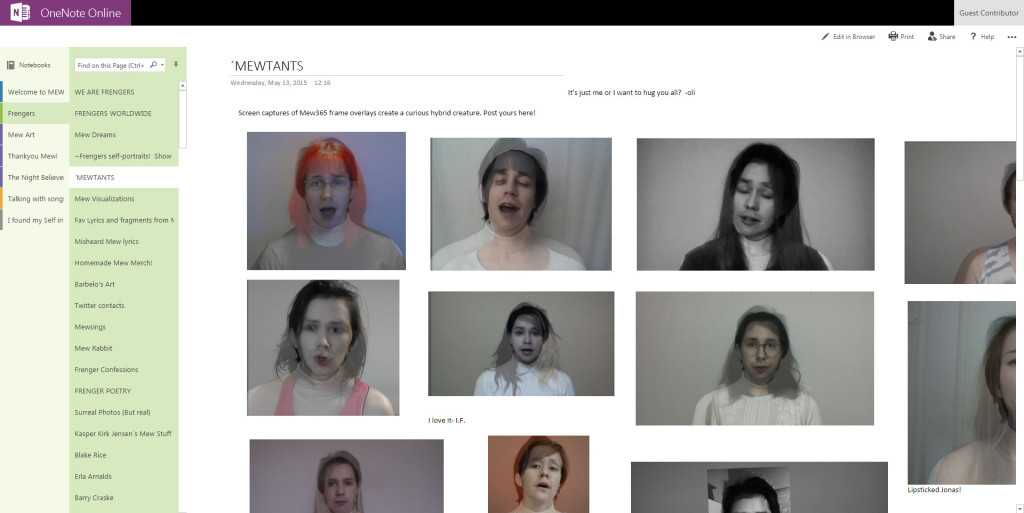 A tab from the OneNote document

The OneNote document was (and at the time of this writing, still is) available for anyone to freely edit. Frengers did all sorts of crazy and creative things, sharing their Mew-inspired drawings, paintings, poetry, photography, tattoos, even anonymous secrets! One of my favorite parts of this document was the “Mewtants” tab which came about as a result of the “Photo Booth” section of the video creation website.

Each Frenger was assigned a single frame from the video which we were supposed to mimic as closely as possible. Some of the poses were extremely tricky to match, often requiring help from another person to execute properly (like the back of someone’s head, arms playing air guitar or drums, or closed eyes.) What they all shared in common was the fact that the sample pose was ghosted behind your own webcam image, creating a weird hybrid creature of yourself and a band member. We quickly began sharing our “Mewtants” with each other, and this silly accidental artform derived from the video creation process took on a life of its very own. 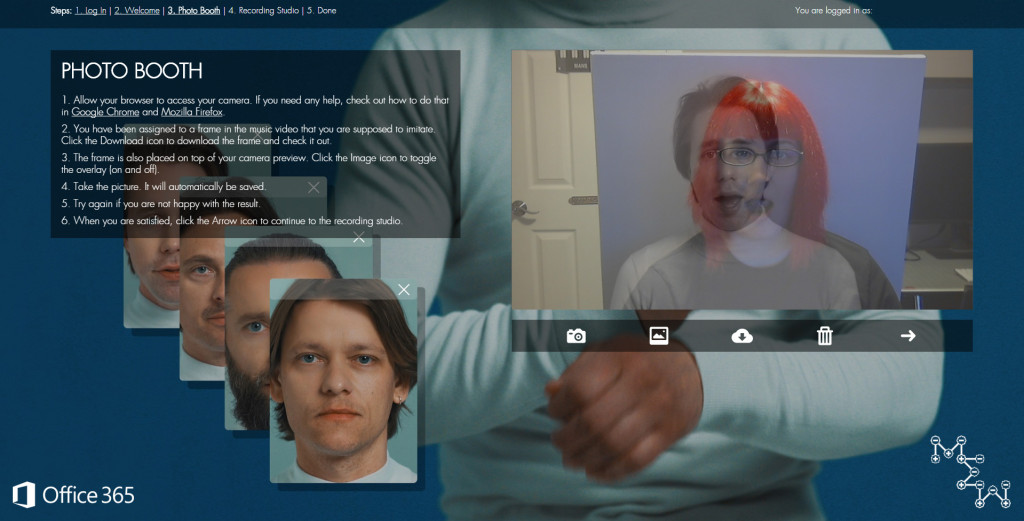 The Photo Booth section of the video creation website, birthplace of Mewtants

Once you had taken a photo you were pleased with, the next step was to sing your duet with Jonas. This caused quite a bit of apprehension amongst shy Frengers who didn’t feel confident in their singing ability, but we were all assured that however bad we sounded, it would be “fixed” later on and we should just relax and have a good time. This Frenger cannot carry a tune, but I gave it a go anyway, and decided to keep my first take (which was not particularly great, but was punctuated with one of my cats loudly meowing to end the song.) I figured it would give someone on the other end a good laugh, if nothing else.

After a bit of a pause while the audio uploaded, the final screen appeared with a link to your own submission, which you could share with others over social media if you so desired. (After much cajoling, I did actually share my creation with one very trusted person, but I was not keen to do so.)

And thus began the wait as the submissions were all processed on the other end and edited into the final product. 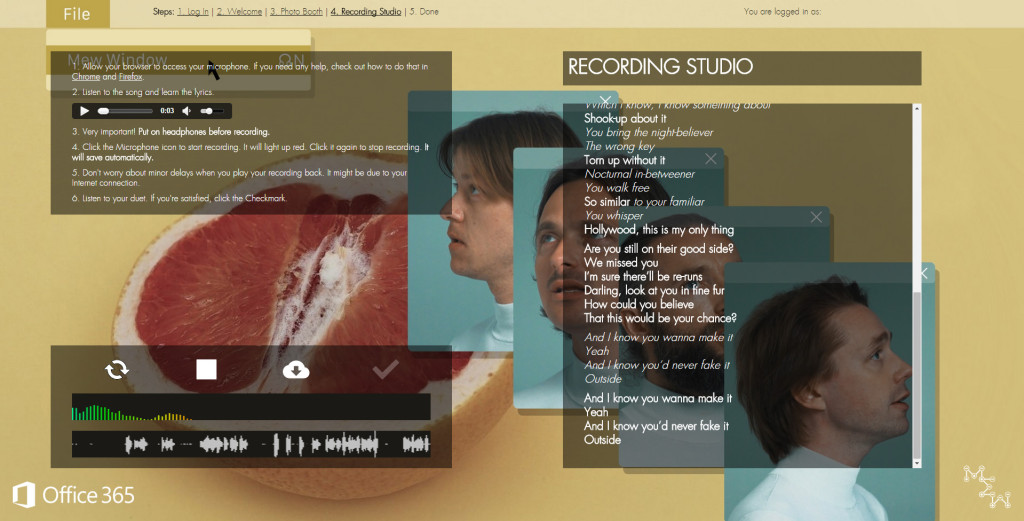 The Recording Studio section of the video creation website

The video was slated to be released on June 8, but unfortunately circumstances behind the scenes caused the release date to be pushed back three days. Since I live in the United States, which is 9 hours behind Copenhagen time, I was dead asleep when the final video release was announced. Unfortunately I missed the initial rush of excitement and the chance to find myself in the video. My friends had already found me by the time I awoke. That’s okay though; it was heartwarming to see other people diving into the video with the same fervor as I would have.

Since I’d been involved from the start, I had a pretty good picture in my mind of what the final product would look like, and the end result was spot on. As a designer and computer geek, I got a particular kick out of the sleek, modern visual presentation, all the cute user interface jokes and less-than-subtle throwbacks to old Microsoft UI elements. But most importantly, I felt incredibly honored to have been part of the experiment, to have had some impact on a piece of art by my favorite band, and to share it with so many people dear to my heart.

Read more about the process on Mew365.

“The Night Believer”: Behind The Case