Tero Heikkinen
Finland
Published in in English on Mar 10, 2014

On July 4th, 2012 I sat down at Bremen Teater in Copenhagen, where Mew played their first live show since the now legendary Opera gigs in 2010. It was a small intimate show (when speaking of Mew on Danish ground) and was meant as a “warm-up” gig for their performance at Roskilde Festival three days later.

I was proper excited as nobody really knew where Mew were in the process of making the new record, and it had been two years after all. I expected quite a lot of new material. Well, as time has shown Mew weren’t quite as far in the process as I thought, but we did get two new songs that evening. Klassen and then Boy, which this article is all about.

A stereo-pinging hard synth started sounding from the speakers and Mew went onto the stage for the first time in years. This was new material, and oh boy – it gave me the shivers. Boy was in a lot of ways a return towards the sound and mood of And the Glass Handed Kites. It had the funky rhythm of Special with Bastian Juel and Silas Graae running the show, while Bo Madsen operates in between the beat with his stellar high notes. At the same time it contains the grandiosity of Saviours of Jazz Ballet or An Envoy To the Open Fields pushing Jonas Bjerre’s voice towards its full power. 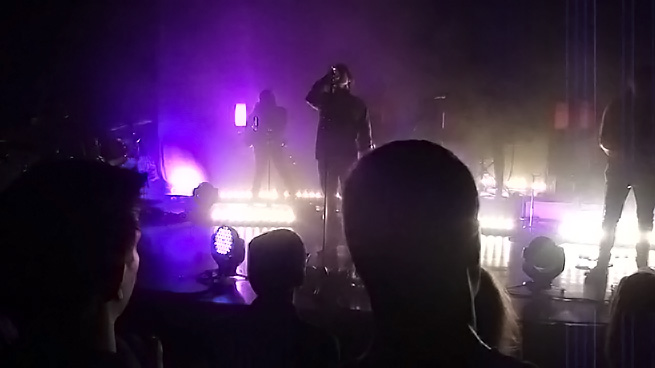 Due to extreme secrecy regarding the upcoming Roskilde Festival show three days later, photo taking was not allowed at the Bremen show, so only some YouTube videos exist.

The structure of the song is the kind that Mew do really well. It’s always giving the impression of being a pop-song with a regular verse/chorus orientation, but it’s really not. I remember the intro (which is not to be found online anywhere) as being quite stark and it’s not repeated for the rest of the song, while the song ends in its most calm state with synth pads and Jonas quietly finishing off his lyrics. Speaking of the lyrics: the intro line “Shut up, boy” must be just one of two occurrences of cursing I can recall besides the first version of She Came Home For Christmas where Jonas sings “he fucks her”.

Another fun fact is that Boy actually had visuals from its very first live play. An owl, which might already have been around since 2009, was rocking its head from side to side following the beat. Jonas has often tried to tell how much time the animations actually take to make, so it was a surprise that Boy even had one. Though, one might argue that it was simple compared to the time it must have taken him to make the animations for White Lips Kissed or Comforting Sounds and especially Louise Louisa which at the time (at least) had been his most time-consuming effort.

While it’d be very wrong to say that No More Stories is a happy record as such, it’s still quite more uplifting than And the Glass Handed Kites. A hypothesis after the Bremen show could have been that Mew were taking a notch back in mood direction towards Kites, which made me quite happy on that particular evening. It’d be naïve of me to claim that the hypothesis would hold water today though. Bo stating on several occasions that the new album is like a collection of children – each with its own personality and Making Friends would be the major argument against such a thought.

So what is the future of Boy then? I have my doubts that the track exists in the same way today as it did back in 2012. I believe Boy might have played the same role as Do You Love It? when its intro was performed back at BeatDay and two other shows in 2007. I think they’ve both been acting as a kind of catalyst for the creating of a new record. It has probably helped pushing Mew in new directions they are constantly searching for, but the fact that they haven’t been playing it at last Summer’s shows might give a hint that it’s not making it onto the record. Maybe we will see a new recorded version of it someday as was also the case with Do You Love It?, but with Mew you never really know. What we do know is that the band has written a few different versions of this song, but for now Frengers will have to do with a couple of bad YouTube recordings and their memory of the song.

By the years I’ve learned to love all the speculation and expectation building when waiting for Mew’s new albums. I guess it’s a developed defense tactic, because the wait is really long, but Mew should always know that somebody is waiting for them – me included.