Tero Heikkinen
Finland
Published in in English on Aug 6, 2014

Just a few days after announcing the Winter Tour for this November, Mew – quite surprisingly – let us know that there will be another summer show on top of Northside Festival where fans saw Johan Wohlert on stage for the first time after an eight-year-long break. At first, looking at the line-up of Vanguard Music Festival (set in the heart of Copenhagen), it seemed that this very hip-hop-oriented festival may not be the most suitable for them, but it actually turned out to be quite perfect. Last Friday we entered the area very early. So early that bands like Choir of Young Believers could only attract a hundred people in front of the stage. Everybody else was sitting on the ground drinking “beverages”, eating their homemade sandwiches and enjoying the sun. The area occasionally reeked of “something” that is a very familiar smell at Danish festivals. The aforementioned Danish act suffered from terrible sound problems and I hoped this would not be the case with Mew, who were going to be playing on the same stage some seven hours later. Mew had no problems with sound. Did you guess that Babyshambles would cancel, by the way? Yeah, Pete Doherty missed his flight and some unknown Danish band quickly replaced. The odds for Mew cancelling a show is approximately 1/300 and it pretty much takes an Icelandic volcano to do that, so feel safe to buy a Mew ticket. 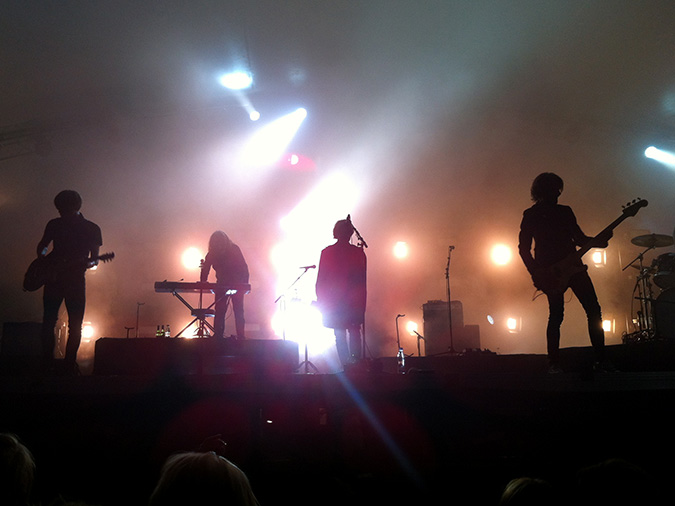 Vanguard Music Festival is more like a picnic rather than a festival. A while back, the organisers went to Finland’s legendary Pori Jazz Festival (which has run continuously for some fifty years) and wanted to create something similar here. It may not be the best idea for some bands, but it makes no difference if you are performing in the evening. Mew – of course – was scheduled for evening. They were the main act on the first festival day and you could really tell, as just about everyone who bought a ticket saw the show. Bands were not clashing here at any time, so you didn’t have to choose what to see.

“ORDER“. I was actually expecting a new intro from Mew. Northside Festival’s opening was re-introducing Johan into the band and along comes Witness. No intro of any kind here, and it worked just fine. Bo Madsen, Silas Graae, Nick Watts and – for me and many others – the most long-awaited performer, Captain Woolheart walked on stage. Cue Silas and Witness starts rocking your shoes off. A few moments later Jonas Bjerre arrives waving both of his hands like some cartoon character (in a good way). Based on the lyrics that can easily be heard live, Witness is probably the song’s final title. Mew has not used visual animations in live shows for a few years now, but the light show more than compensates for that. Though, if you suffer from epilepsy, be aware. Witness alone is proof that the upcoming album will be an amazing album full of catchy tunes.

Klassen followed immediately, and it’s been played for so long now that people actually know how to sing along to it. We first heard the early version of it live more than two years ago and the album is still not here. Typical Mew to end a song in an entirely different place than where it began. The “My life is my own, and now I’m always home…” -bit is a really catchy, cute, and more recent addition that speaks to everybody in a similar fashion, whereas Mew is often so differently interpreted by various listeners. 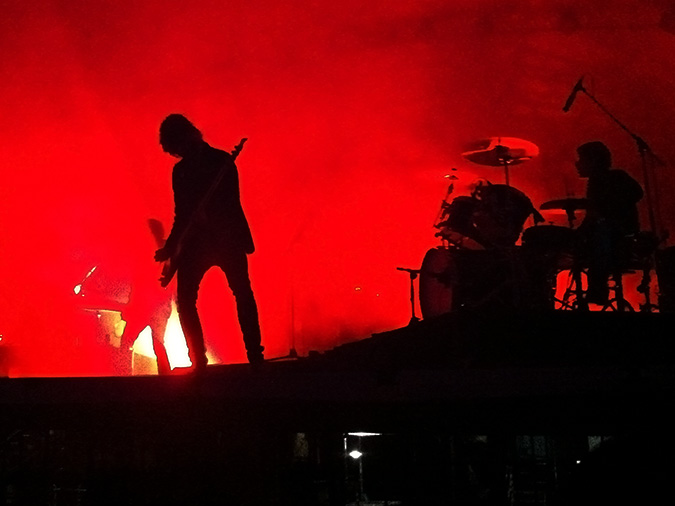 As expected, the setlist was very similar to the one of Northside. Big question mark to me was going to be (and probably will be for a little while longer) the No More Stories -tracks as Johan was not around writing them and it might feel odd for him to play them. Really, no, it doesn’t look like that at all. At Northside Mew played Sometimes Life Isn’t Easy and here we got Beach and Silas the Magic Car. Beach – dare I say – even improved on stage with bass being more powerful and Johan clearly is a fan of the album that he did not help write. He gladly takes center stage often during the show and from the audience’s point of view, Mew looks complete now. It was as if he never left the band. The chemistry looked so familiar, and they look better live as both sides of Jonas has a guy rocking at all times.

Russle is a track I can see as a future music video featuring Russell Lissack, assuming the much discussed guitar riff is his contribution and the Bloc Party guitarist (who is a huge Mew fan, to add) finds the time to do it. Mew still doesn’t care to milk the catchy riff like many bands would, but the moment you’d expect to hear it for the third time, the band takes another route and once again we end up talking about a song that has a completely different beginning and ending (that sounds like a tribute to 80’s pop bands somehow). After the song Jonas asked if anyone had suggestions for a song title as they have not named Russle yet. Not sure if he heard any good ones.

Vanguard had a curfew for 11pm, but Mew played 6 or 7 minutes overtime. No cutting songs.