I was waiting for the wrong train. We were already running late, in an unfamiliar city, unfamiliar means of transportation helping even less; this Florida girl could not imagine living in Chicago and having to rely on a train to take her to her destinations. “How do people do this every day?” I kept thinking. This wasn’t the only problem we ran into today on our way to see Mew; we had gotten on the right first train, which took us to our connecting train stop. And then, of course, the elevators and stairs to the connecting second train were closed off for construction. “Where can we find a connecting train?” we asked a staff member. “Two blocks down, two blocks to the left,” he said. We took off sprinting.

We finally get to the new station, and we hurry to scan our passes and run up the stairs to wait on the train. We catch our breath, and we feel a wave of relief blanketing us. And then the train stopped in front of us, not two minutes later. On the opposite side of the tracks. Our hearts sank. That was it. That was our ride, and we had just missed it. “Let’s just go back home,” my boyfriend muttered. He was upset, tired, sweaty, and ready to give up. “I’m going to get us there,” I vowed. I ran downstairs and asked a staff member, “Which train will take us to Kimball?” She pointed in the direction we needed.

We get back upstairs and we wait. We’re quiet, frustration steaming out of us. It was past 7 PM, and we were worried about not getting there in time to get good spots. The train finally makes its way to us, about 15 minutes later. We sit without speaking to each other, already knowing what the other is thinking. As we jerk back and forth with the movement of the train, I tell him, “At least I’ll have a good story to tell.” He smiled, and the mood lightened up a bit. Little did we know that my statement would be the most absolute truth.

Armitage. We got off at this stop. And we started walking. And walking. And walking. Jeez, Chicago! How big is this place anyways? My feet were hurting like never before; I think next time I’ll go with comfortable shoes instead of cute shoes in a city. Actually, never mind; I would never let Jonas Bjerre see me in anything other than cute shoes. Ten, fifteen blocks later—I’m not sure, I lost count—we had arrived to Park West. We hurry in to meet our friends, who were waiting for us. We check out the merchandise table, and I decide to buy the white shirt rather than the black shirts. This is important to know, as my decision will be played out later tonight.

As we waited for Mew to begin the night, we make our way towards the front of the stage. I managed to get almost to the front; just one person in front of me. Good enough! This is my second Mew concert. The stage is set up, and the lights are dimmed. The band walks out, and the audience cheers and claps. It’s such a surreal moment, even though it’s my second time seeing them. I feel my heart beating rapidly in excitement.

Mew began their performance as soon as they stepped onstage. There were no introductions, no pause; they went straight into what we all waited so long to see. The night began with In a Better Place. As they continued to play, the crowd grew comfortable, familiar, calm. We began to dance and sing, more and more with each passing song. Special was next. Along with their newer tracks were Apocalypso, Saviours of Jazz Ballet, Am I Wry? No. I was absolutely surprised and delighted to hear older songs, these which I have essentially grown up with, and with which for years I have sang repetitively in my room at home, swaying back and forth to the melodies that both calmed me and excited me. I felt the same calm excitement tonight with these home-like songs.

The most thrilling thing to hear was the beginning of Candy Pieces All Smeared Out, with all its hardcore, strange beauty. I felt an adrenaline rush with the emphasized beating of the drums, and the stars of the night head-banging to the addicting rhythm. They were rockstars.

Then, halfway through the set, they dim the lights and our world turns dark. But it feels safe. We can barely see the people next to us, but then the most nostalgic tunes begin to sound from the piano: Start. When do we have the opportunity to hear such rare, beautiful tracks like this in person? Not the first time I attended their show, that’s for sure. Jonas is serenading us with emotion, and everyone in the room is silent and entranced. This was such a treat.

And finally, the the very end, everyone walks off the stage except Mads Wegner. I get the most chills here. He begins to play Comforting Sounds, and Jonas comes back to us to give us one last gift. This song is one of my favorites, but there is no comparison to living and experiencing the song in person. There is something about the slow incline that the song takes, the journey upwards that is both inspiring and saddening to me. This is art in its rawest form. THIS is who Mew is to me. I am pushing back tears at the end of the song, which is the song that finalizes their show.

Sixteen angelic, ethereal songs later—those of which included The Zookeeper’s Boy, Satellites, 156, and my favorites, Twist Quest, Introducing Palace Players, and Snow Brigade—we congratulate them in a roaring round of applause. The band comes together to bow down, holding hands, while we admire the magic we have just witnessed. 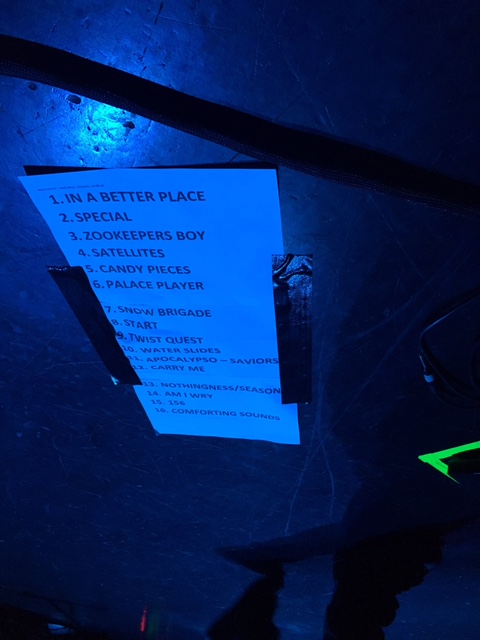 We make our way to the lobby, looking to buy last minute items (those egg magnets are soo cute!). The venue is almost empty by now, with the exception of our small group of four, and about two other small groups. There was a lady making rounds and kicking people out. “Are you VIP?” she would ask. If not, she led you out the door. She came to me and asked the same question. “I’m writing for the fan website,” I told her. She shrugged and kept walking. Phew! I thought that was the end of the night for us.

Not five minutes later, I hear the voice of an angel; Jonas was standing behind me. He was taking pictures with the small groups that were still inside. I turn around and immediately take my phone out. Picture time! I was in a daze as I neared him and smiled for the camera. We took pictures with everyone in the band, and I was thrilled to hear Mads speak Danish to a few admiring fans who also spoke Danish. Even though I had no idea what they were saying, I felt like this was the most authentic experience I could have had with Mew. Johan Wohlert was so sweet as well, giving each one of us attention and pictures. We even had Silas Graae come out JUST for us! He was the only one who hadn’t come out, so naturally we asked where he was. They ran off to go get him, and when he came out he was so sweet and polite about it. Whoops! At least we got our pictures! My boyfriend took out a permanent marker from his pocket. I’m so glad I got the white shirt instead of the black one, so all the autographs showed up perfectly! And as if that wasn’t enough, Jonas told me happy birthday! Did I mention it was my birthday? ☺ He also wrote it on my new white shirt; now I can’t ever wear the shirt. I’m all right with that though!

What we thought was a terrible beginning to a fun concert ended up being the build up to one of the most memorable birthdays of my life. Thank you to MewX for the wonderful opportunity; if I had not said I was writing for this website, I would not have had this amazing encounter with the best, sweetest, most genuine band in the world. 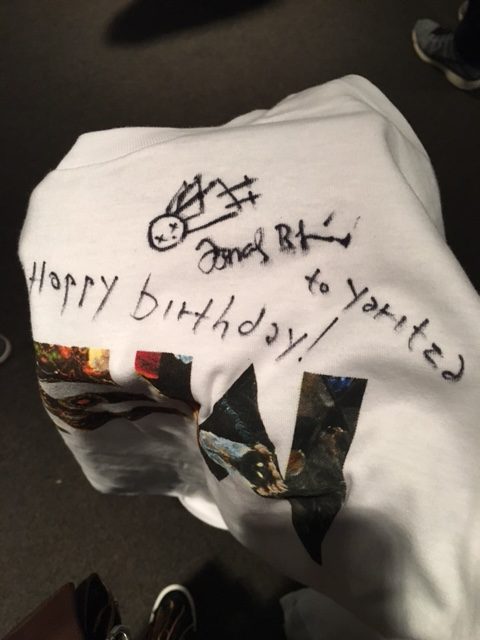