Tero Heikkinen
Finland
Published in in English on Feb 25, 2010

Do you remember that the song Hawaii had completely different visuals when Mew first started playing it live? Then the animation quickly changed and became the one where the joyful reindeer skulled dancers fill the screen. Jonas Bjerre, now back in Copenhagen, explained us something about the replacement in Hawaii and about the new added visuals for Tricks of the Trade (that premiered in Japan last weekend).

“I was able to finish editing the visuals for Tricks of the Trade on the plane to Tokyo. It consists of some of the un-used material that the Bacon team delivered to us when we first started rehearsals for touring No More Stories. The three directors Martin de Thurah, Lasse Martinussen and Adam Hashemi made all the music videos, but also contributed to the live visuals. The majority is still made by me, but they gave us material for the live visuals for Beach, and also the girls in Hawaii (which I think are beautiful onto themselves but I felt they were a bit too static for the song, so I later replaced them with the reindeer dancers) and now Tricks of the Trade. They’ve created an astonishing body of work for us, with very little time to do so. They are brilliant guys, and they’ve got an incredible team at Bacon.” 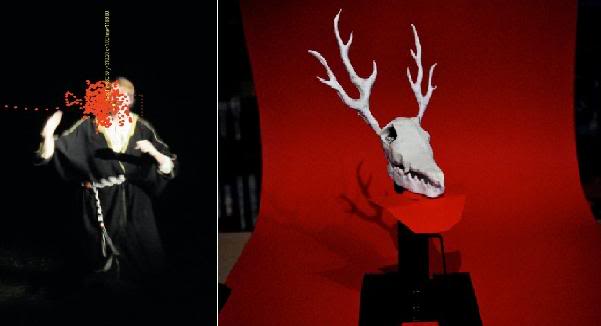 “I filmed myself dancing in an esoteric robe, wearing a mask with tracking marks on it. I then stop-frame animated the skull, the bottom jaw and the antlers are made from hardened fimo clay, the upper bit is made from a tough white playdough, so that I was able to open and close its mouth. I made two different sets of antlers, for variation. Lastly, I tracked the skulls onto the heads of the dancers using the tracking marks (as shown above). And finished off with some out-of-focus dust patterns in various colours, and some lighting effects. Ta-dah!”

We mentioned in our latest live show review that the visuals for Cartoons and Macramé Wounds do not look finalized and that they should’ve been more “cartoonish”.

“I too favor the visuals that have characters and perhaps a bit more storytelling. Although I believe there is something to be said for the more abstract/pattern-based visuals as they take up less of the focus and leave space for the performance itself. As you know, animation is very time consuming. Time, it’s the one thing we all eventually run out of.”

There have also been frequent questions about the very talented brothers Quay and if Jonas has collaborated with them somehow.

“I did work briefly with the brothers Quay, but that was a long time ago, and it wasn’t in any creative capacity. I did some “touch-ups” on their project In Absentia which was a collaboration between them and the late German composer Karl-Heinz Stockhausen. I merely removed some hairs from the gate, a bit of dust here and there, nothing fancy. I’m not sure I’m even included in the credits. I did enjoy talking to the brothers though, they seemed like really nice people and I enjoy their work tremendously, seems to me they are carrying on the legacy of Jan Švankmajer.”