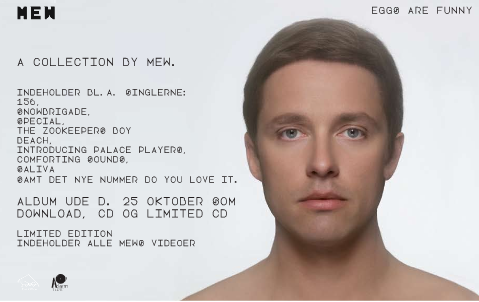 Eggs Are Funny is a collection of tracks that Mew themselves consider their absolute best, but if you took a poll on a street, the fan version wouldn’t be that different. Right? It’s just very hard to choose fourteen tracks (plus Do You Love It) from five albums. Saliva is not a new mix (as mentioned before), it’s the very same version as on Half the World Is Watching Me. Sony Music is not ready with their version yet, but that should be released in November. Despite having two tracks from Mew’s first two albums, the track listing on that release is expected to be the same.

Limited Edition -digipack has a slightly different artwork, and the DVD contains all the music videos that Mew have released so far. The videos on DVD should come in thirteen chapters (not in the same order as they’ve been published):