Tero Heikkinen
Finland
Published in in English on Feb 6, 2009

Jonas Bjerre revealed to Spin.com some information regarding the upcoming Mew-album, produced by the man behind Frengers, Rich Costey. The as yet untitled album is finished and is due to be released this June. The album will be quite different from their critically acclaimed And the Glass Handed Kites released almost four years ago. The new release will not be a concept album where all the songs are mixed together. “The last record we did was like one long thing, and I love that about it,” Jonas told Spin.com. “We didn’t want to do that again, we wanted to have separate songs. I think it’s like a counter reaction to what we did last time.”

As the previous album was quite dark in nature, the follow-up will be more uplifting and danceable. “Oftentimes, even if the song’s not happy, the lyrics are. I think that this record’s probably a bit weirder in some ways, but also there’s some really very clear stuff.” Jonas also played two freshly mixed songs from the album. A five-minute challenging Cartoons and Papier Mache and a track called Beach. “It was two different songs and kind of came together into one,” Jonas tells about Cartoons and Papier Mache. “It used to start with a little piano thing, but we felt like we’ve always done that, starting really quiet and then building.” The second track Beach is said to be the most straight-forward song Mew has ever recorded. “One of the reasons we make music and what we think is exciting about making music is to do new things and put ourselves into places where we don’t necessarily feel safe. Beach is a little bit like that.”

As of now, Jonas is once again challenging himself with new animations for upcoming live shows and they are hoping to play some of them prior to the album release, but summer festivals are on their way. 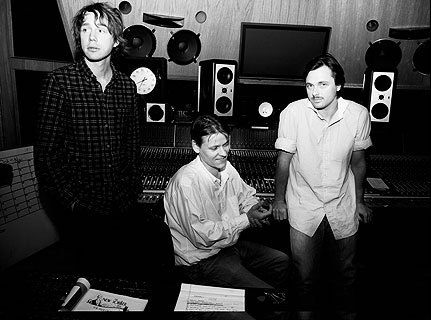