Tero Heikkinen
Finland
Published in in English on Dec 6, 2009 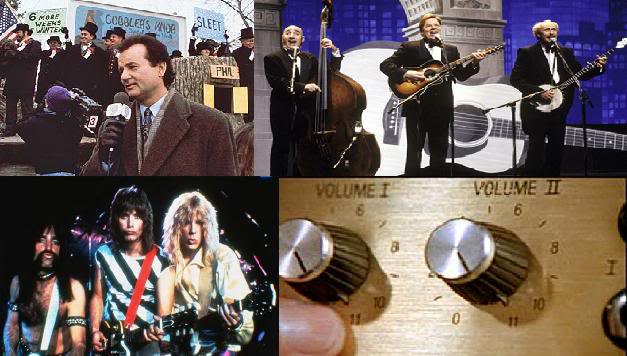 A very funny movie about a weatherman (Bill Murray) reluctantly sent to cover a story about a weather forecasting groundhog in a small Pennsylvanian town. Soon he finds out that some sort of curse has been placed upon him and that he must relive the same day over and over again. He must make the best of it. Andie MacDowell plays his love interest. This movie came out in 1993, arguably one of the best years in cinema – and Murray can be seen in one of his best performances. Groundhog Day is also THE movie Jonas would take on a desert island.

The best mockumentary of all time. In fact, it set the bar for the whole category. Marty DeBergi (Rob Reiner) is a film-maker who decides to make a documentary about the world’s loudest band, the British heavy metal group Spinal Tap. The movie satires the whole rock and roll scene and it passes itself off as a real documentary. The actors (who in real life are American) play the music themselves and the band still exists. Actor Reiner’s debut film as a director is a must for all music lovers.

Not as funny as the aforementioned movie, A Mighty Wind is about a fictional folk music group that consists of the same actors as in This Is Spinal Tap. Directed by one of the band members, Christopher Guest, this mockumentary is based on their own Saturday Night Live sketch. A fun fact: The Folksmen opened for Spinal Tap in the early 90’s and were booed during the show. The audience had no idea that the musicians were same people in both bands.

Next up in ‘Jonas At The Movies – Part III’ : Fantasy / Science Fiction / Adventure.