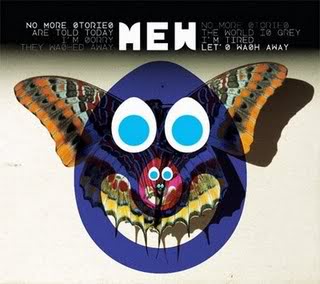 It’s been four long years since we last saw an album from our favourite Danes. When their sophomore international release, the stratospheric And the Glass Handed Kites, was received with widespread critical acclaim in 2005, they were a four-piece, with bassist Johan Wohlert still a central member of the band. His family-related departure in early 2006 left a void – one that, to be filled, would require a shift in the musical psychology between singer Jonas Bjerre, guitarist Bo Madsen and drummer Silas Utke Graae Jørgensen. And expectations were running high.

In 2009, here they are, having risen to the challenge, exploring ideas they never have before, and the result is a towering achievement. No More Stories is what happens when an end-of-the-world outfit like Mew decides to lighten up, maybe dance a bit, and generally have some fun. Across its varied fourteen tracks, the band traverses all kinds of territory, from buoyant joyrides to delicate meanderings. It’s a wonder they manage to fit so much onto an album without sounding bloated and disjointed, all the while retaining their own style.

Opener New Terrain is a full-hearted expedition, brimming with goodwill and excitement, and it’s easy to see why people often single it out as a highlight. There’s more to it, though: if the vocals sound partially recorded backwards, it’s because reversing the entire track actually reveals another piece (called Nervous) entirely. The two songs work back to back, with a considered progression both ways, and different lyrics laid over each other in opposite directions: it’s quite a feat.

From here on in, we are treated with three deliciously direct singles, plunging into Introducing Palace Players, an oddly addictive art-funk jam that’ll make you dirty dance unlike anything Mew has done before. An offbeat, unexpected intro leads us in, before a truly climactic outro. Bo really struts his stuff here, attacking every unpredictable note, and Damon Tutunjian guest stars on bass. Beach sees infectious melodies bathed in synth and chilled guitar, Jonas’ falsetto glittering as much as ever. Repeaterbeater could be their most fitful, urgent song yet; the rhythm thumps, the guitar is relentless, and somewhere in the hypnotising chorus, a siren sounds.

That’s just one example of the kinds of shoegazey flourishes that add flair throughout this album. A layer of subtle synth runs through most songs, giving expansiveness without being overbearing. Yes, that thing in the intro of Introducing Palace Players could very well be an airplane nosedive. Layers of many things can be heard everywhere – a rainmaker here, some clapping over there, people laughing somewhere, a beam firing in a distant valley… This layered approach is reflected in the album’s physical enclosure, with its strange face being printed on the CD while the butterfly makes up part of the jewel case.

A short, spacy intermezzo lets us take a breath before Silas the Magic Car, a slow-burning throwback to their dreamier Frengers moments, which fans of that album will appreciate. A twinkling melody guides a lyric split at every second syllable, and a children’s choir follows. The seven-minute winding journey Cartoons and Macramé Wounds doesn’t feel that long, but leads us effortlessly from vast fields, down through sparkling caverns where ghostly choirs sing, and back into the winter sun for a grand conclusion.

At this point, you’re only halfway through! 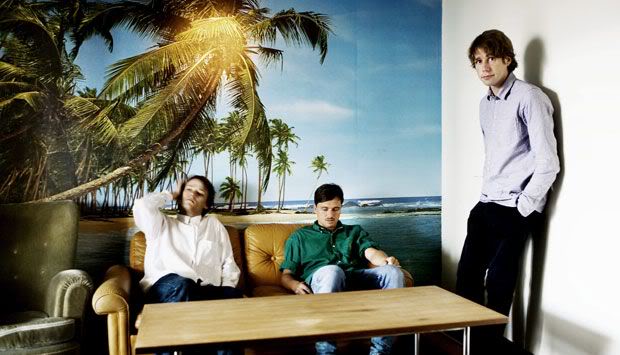 The interlude Hawaii Dream coaxes us softly into Hawaii, a tropical jam featuring such exotic instruments as kalimba, marimba, and water percussion. As it takes flight with rich, sun-kissed harmonies, Jonas heartens us – “And we all make mistakes once in a while” – and it’s one of the album’s finest moments.

The whole record is littered with Silas’ trademark drum patterning; the same musical ideas and chord structures are given new life in ways that are discrete yet connected; the band manipulates notes on scales in ways rarely heard in pop-rock today.

Vaccine continues in the exotic vein of Hawaii, only with greater fervour, and a more pronounced offering from Bo (who has taken a back seat on the past few tracks). Listen to that chorus: it’s a soundtrack for the surf, or the snow! At its climax, the song launches into a more driven theme with heavily distorted guitar; a sky-high melody repeats at odds with the time signature, as we have heard in Repeaterbeater (and previously on Kites).

While some of these ideas are not new to Mew, they are hardly common elsewhere. On this album, their execution is more controlled – key changes are less heavy-handed, transitions less overwrought. For some, these moments may seem to lag, or even lack some of the emotional immediacy of their earlier work; for others, they will be reflective of the band’s maturing ear and growing curiosity.

Just how wide they are casting their net can be seen in the electro-powered, vaguely ominous Tricks of the Trade. It bounces along, snaps and clicks playing in each ear, and features arrangements for strings, piano and flute by composer Nico Muhly (who has also worked with Antony and the Johnsons and Grizzly Bear of late). Keyboards dominate, building a synth soundscape, while the guitar seems to fade into the background until the song’s final stretch.

After another beautiful intermezzo quiets the mind, the hushed entrance of Sometimes Life Isn’t Easy misleads, exploding into a brisk intro that brings the toy piano and Silas’ wild cymbals to the foreground; spoons are hitting jars, and the kids are singing too! A simplistic refrain of “Here we go/Here we go” gives way to another brilliant highlight on the album: an outro that trembles with breathtaking fragility, much like the voice of who features in it, 88-year-old avant-garde singer Mari Helgerlikova.

A certain twinkling melody returns transformed in Reprise, bringing a recurring chord sequence with it. Nick Watts, who is attributed with keyboards on Beach, Cartoons and Macramé Wounds and Introducing Palace Players also adds lush sonic textures to this final track, which builds and builds… Until it all comes tumbling down in symmetry. Bo plucks away, creating a perfectly imperfect atmosphere as Jonas, deep and drained, tells us: “Not long for me/For you see, the dreamers have all grown/And I so wanted children of my own”. A mesmerising synth lingers, closing the curtain.

Indeed, the band has become more self-assured, honing in what they do best, and leaving behind their past ambitions of dire excessiveness. In a strange paradox, however, their vision seems to have expanded in other ways: gone is the straightforward rock instrumentation, giving way to more guests, crisper synths, toy piano, African percussion, hand claps, ukulele, a children’s choir, and the occasional finger snaps. The mixing is brighter and closer to the ear than ever. Doesn’t it all just sound so full, so happy? Overall, you get the idea that Mew is pretty optimistic about life these days.

The band is notorious for their, uh, frightening album artwork, and this one is no exception. Created by the M/M Paris group, the strange happy face-butterfly creature actually makes more and more sense when you think about it: this music is strange and peculiar, yet joyful and accessible… and it can be deeply enchanting.

Perhaps the album is not so eerily poignant as 2003’s Frengers, nor is it the shapeshifting epic that was Kites. In reality, it was never supposed to be. This time around, Mew have come from a different place – somewhere warmer and more temperate – and while there will always be a bit of Denmark in their veins, No More Stories is a practically perfect holiday.

All tracks produced by Rich Costey and Mew (2009).